Tuesday, July 29th, 2014 Bill Kurzeja spoke about Hootsuite.  This is available on YOUTUBE by clicking here .

Tuesday, August 26th, 2014 at 8:30 am Brian Elliott who works for the California Democratic Party (CDP) in association with the Scott Peters for Congress Campaign spoke on an environmental topic.

Tuesday, September 16th, 2014 at 8:30 am Amelia Roche spoke regarding communications in the workplace.

Tuesday, October 7th, 2014 at Noon: Michelle Wolff entertained us with some stand-up comedy, and Julie Freiburger explained Yoga and offered some breathing exercises, too.

Tuesday, October 21st, 2014 at Noon: Birgit Witherspoon, HHC spoke regarding “How to save time, money and your health”.

Tuesday, December 2nd, 2014 at Noon: Carter Moss discussed his finding from the book:  David and Goliath: Underdogs, Misfits, and the Art of Battling Giants.

Tuesday, January 27th, 2015 at Noon: Christina A. Higgens of http://sdhypnotherapy.com/  spoke:  “Hypnotherapy and the Power of the Subconscious Mind”

Tuesday, March 24th, 2015 at Noon: Karina Antonopoulos spoke: “The Myths & Truths of High Sensitivity; How Do I Know If I Am a Highly Sensitive Person?”

Tuesday, April 7th, 2015 at Noon: Amelia Roache of spoke:  “What are you Listening For?”  A look at our cultural habits in communication and their effect on personal health, relationships, business structure and sustainability. How Permaculture Design, Compassionate Communication and other restorative practices can change our social culture.

Tuesday, April 14th, 2015 at Noon:  Andrew Sheftel spoke:  “Come learn about the mortgage market place and lending in Southern California and Ocean Beach. Find out what went wrong in 2008 from a loan officer who was in the trenches. 14-years of living and lending in OB.”

Tuesday, April 21st, 2015 at Noon: Gina Faye Smith spoke:  “Everything you always wanted to know about therapy but were afraid to ask!”

Tuesday, April 28th, 2015 at Noon: Mary Tolena spoke.  Rhythms of Balance in Business and Life Our lives and businesses continually operate on many layers: From pursuing long term goals, to deciding where to take the client for lunch.  From tackling extended major challenges, to playing catch with the dog at the beach.  In this interactive, playful talk, we will experience how simple principles of rhythm can help us integrate these different layers of life into a rich, coherent, and balanced whole.  For those days when you feel “out of sync,” you’ll learn a framework to rebalance your attention and actions.  You’ll leave relaxed and uplifted, buzzing with the rhythms of life!

Tuesday, May 5th, 2015 at Noon: Rebecca Taylor to spoke on transportation options for seniors.

Tuesday, May 12th, 2015 at Noon:  KT Robinson spoke about kindness. Part of her talk can be seen here.

Tuesday, May 19th, 2015 at Noon: Marguerite Baca spoke: “Scientific and Spiritual Principles for Peace, Health, and Fun.” Her website can be found at www.margueritebaca.com .

Tuesday, May 26th, 2015 at Noon: Maria Tostado and Joe spoke about solar energy and their company  Current Solar. Their website can be found at http://www.currentsd.com/

Tuesday, June 2nd, 2015 at Noon: Heather Staruski spoke about a new way to clean without chemicals and the benefits of essential oils.

Tuesday, June 9th, 2015 at Noon: Mel Roark spoke with regards to her business.

Tuesday, June 16th, 2015 at Noon: Robert Burns of http://robertburns.biz/ spoke about and played the bagpipes.

Tuesday, June 30th, 2015 at Noon: Robin Sol of www.breathefitlife.com spoke:  “Reduce your pain. Increase your activity. Improve your life.” – learn about a movement practice designed to restore the body’s natural order and put YOU at the center of your health. It teaches your body how to properly support itself and move as nature intended.

Tuesday, July 21st at Noon: Scott Doetsch spoke: “IMPORTANT Social Security and Retirement Dates you need to know. How long will you have to work? Whether you’re all set for retirement or still planning, You’ll want to make note of these key dates.”

Tuesday, July 28th at Noon:  Carter Moss spoke:  “How to get better at decision making.”

Tuesday, August 4th at Noon: Theresa Vee spoke.  “How the Lymphatic System Creates Flow and Stagnation in Every Aspect of Life.”

Tuesday, August 11th at Noon: Marisa Young spoke. ” How therapeutic massage, reiki energy healing and other holistic methods can assist in reducing physical and emotional stress as well as other ailments that affect the body.”

Tuesday, September 22nd at Noon:  Melyssa Roark spoke: “Affordable Care Act and how to obtain the right insurances for the self employed.”

Tuesday, October 6th at Noon: Robin Sol spoke:  Breathe Fitness (Part 2 of 5): Foundation Training – Universal Accessory for Life & ActivityFoundation Training is a series of exercises designed to teach efficient use of your body by building it up rather than constantly breaking it down.

Tuesday, November 10th at Noon: Terrie Leigh Relf spoke: “How to be a Rapport Ninja!”

Tuesday, November 17th at Noon:  Averi Melcher spoke: “How to Harness the Creativity of Travel to Boost Your Business.”

Tuesday, December 15th at Noon:  Gina Faye Smith led a discussion on couples counseling and the dynamics of a successful relationship.

Tuesday, May 3, 2016 at Noon:  Mercy Baron of http://baronsbbqbeat.com/ spoke about the local BBQ scene.

Tuesday, May 31, 2016 at Noon: Robin Naughton led a conversation on health and fitness.

Tuesday, June 7, 2016 at Noon: Attorney Robert Burns spoke:  “The anatomy of an automobile collision claim with important nuances frequently, but not usually, present.”

Tuesday, July 19, 2016 at Noon: Carter Moss spoke:  “How to cast a compelling vision for your product/service.”

Tuesday, September 13, 2016 at Noon: Jude Hotep spoke:  “What would it be like if you could let go of everything that no longer serves you?”

Tuesday, October 11, 2016 at Noon: Clayton Connolly spoke: “Identifying your core personality type through the Enneagram. A fun and introspective look at who you are and who you know. With Clayton Connolly of Clay homes Real Estate.”

Tuesday, October 18, 2016 at Noon: Ania Volovique spoke: “How to breakthrough your fears so you can get unstuck and move forward.”

Tuesday, December 27, 2016 at Noon: Ania Volovique led a Mastermind Roundtable that enabled all to brainstorm and get feedback on their business goals for 2017.

Tuesday, May 16, 2017 at Noon: Tina Higgins of sdhypnotherapy.com spoke.

Tuesday, June 13, 2017 at Noon: Matt Beatty spoke:  “Kinds of things we see at the library, what different people check out, and how changes in Ocean Beach affect the library and the neighborhood in general.”

Tuesday, August 1, 2017 at Noon:  Carter Moss spoke: “Getting Good at Having Hard Conversations.”

Tuesday, August 29, 2017 at Noon: Michelle Wolff spoke about growing your own marijuana.

Tuesday, September 5, 2017 at Noon: Taberah Joy Holloway spoke:  “Non-violent communication – how to resolve interpersonal and intrapersonal conflicts in your business and life.”

Tuesday, October 24, 2017 at Noon: Steven H Bickel will speak:  Moving from Pain and Fear to Love … an interactive workshop with worksheets that help you to be more free and empowered.

Improv…ing your Business and Life

Enjoy an interactive Improv show and Play-shop in an incredibly Safe environment.  I specialize in creating safe environments.  Where you can sit back and enjoy, learn, and laugh, or you can get more  involved.

I love, love, love sharing this gift…it is positively life changing…plus you are going to Laugh and Learn.

Put the Fun secrets of Improv on your side, andimprove your business and the rest of your life.

Many companies including: Google, Pepsi, MetLife and numerous others use Improv to improve their communication, creativity, sales, teamwork, andleadership training.

Why? Because it is fun, and the learning goes deep into you. You own it. You laugh, you play, youremember.

I have worked with the Alzheimer’s Association,EDCO, San Diego Bar Association, Just In Time, Intuit, MedImpact…

Tuesday, January 30, 2018, at Noon: Gilad Dechner spoke: “Business entities and the costs and benefits of incorporating.”

Tuesday, February 20th, 2018 at Noon: Dave Chase spoke about how to sell items on eBay and Craigslist and social media websites.

Tuesday, March 13th, 2018 at Noon: Courtney Dack spoke about some fundamentals of investing and different retirement account options to help you best plan for your future retirement.

Tuesday, May 1, 2018 at Noon: Anna Feagan and Garek Ng spoke about the benefits of Naturopathic Medicine.

Tuesday, May 8, 2018 at Noon: Juliet Osakwe spoke about forgiveness.

Tuesday, May 15, 2018 at Noon: Kathleen Lisson of https://lipedematreatmentguide.com/ spoke about Lipedema.

Tuesday, May 22, 2018 at Noon: Robin of Breathe Fitness to speak: ABCDs of chronic pain-free living and sneak peek at ErgoMOMics!

Tuesday, June 5, 2018 at Noon: Chet Bruce spoke:  “The truth about Internet Marketing based on my best selling book “The 21st Century Transformation” and how you can get free advertising and help homeless vets at the same time.”

Tuesday, June 12, 2018 at Noon:  Nate Church of http://www.ontrackwellness.com/  spoke:”Transition and Growth. How your health and wellness impacts various transitions in life. What is your next transition in your life and how are you preparing for it?”

Tuesday, June 26, 2018 at Noon: Nick Wallace to spoke about using a financial advisor.

Tuesday, July 10th, 2018 at Noon: Chuck Hardwick of https://dancingpandamarketing.com/ spoke about leveraging Facebook Live with your iPhone to promote your own business or cause within Ocean Beach.

Tuesday, July 31, 2018 at Noon: Angela Cornell Bressler spoke: “Be the change you want to see in the world & learn how you can start right here in your town! Easy and fun ways to help others”

Tuesday, August 21, 2018 at Noon: Dave Kenneally to speak:  “The importance of community in mindfulness practice”.

Tuesday, September 4, 2018 at Noon:  Scientific evidence for reincarnation and a Buddhist guided meditation by Gen Lhadron. An American Buddhist nun who teaches at KMC San Diego (near Rosecrans street).  More information is available at Meditateinsandiego.org

Tuesday, September 11, 2018 at Noon: Robin Satterwhite to spoke about her lifestyle blog at http://freerobinfly.com/

Tuesday, September 25, 2018 at Noon: Ingrid Martinez spoke: “Five ways reviews are killing your business, and how to fix them.”

Tuesday, October 30th, 2019 at Noon Danielle McGhee spoke: “Join me to learn three daily practices to call in more abundance, vitality and love.  We’ll talk about tangible ways to activate your inner power, connect to the bigger picture, and maybe have a few laughs.”

Tuesday, November 27th, 2019 at Noon Nate Church of http://www.ontrackwellness.com to speak.  “How to make changes in health and wellness stick.” 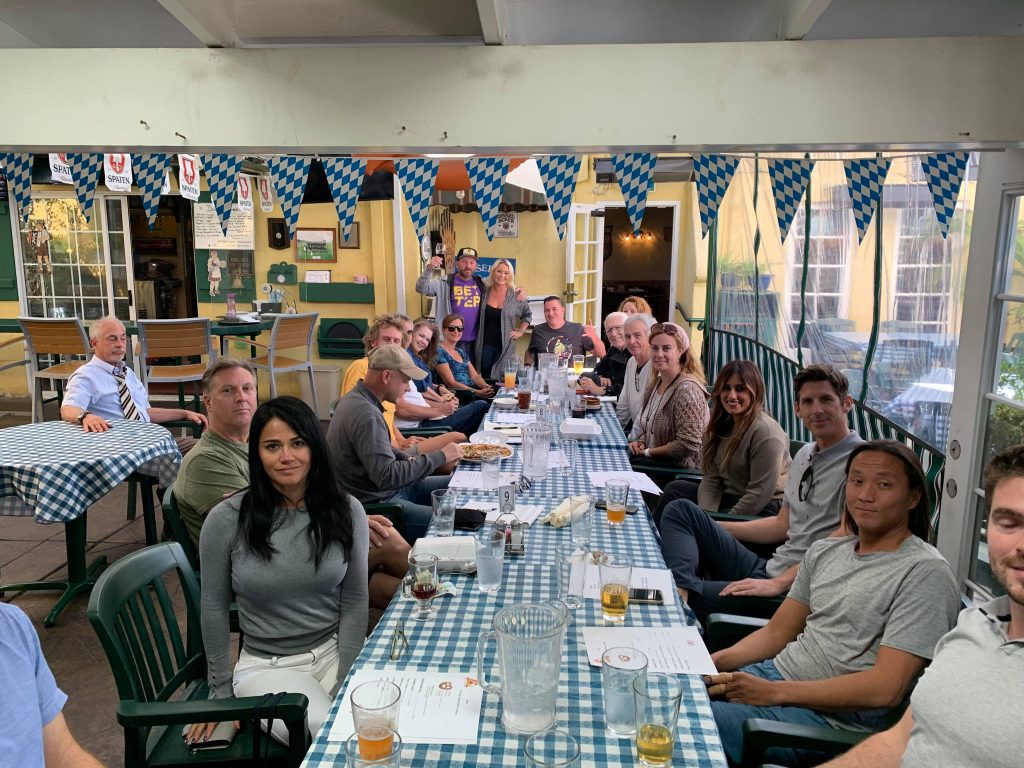 Tuesday, October 19, 2021:  Chuck Hardwick of Dancing Panda Marketing ran an event and had members ask the other members 1 to 3 questions to get to know them better.

Would you like to speak at a future meeting?

If you would like to be considered as a speaker at a future meeting, please text Chuck Hardwick at 760-579-6120.